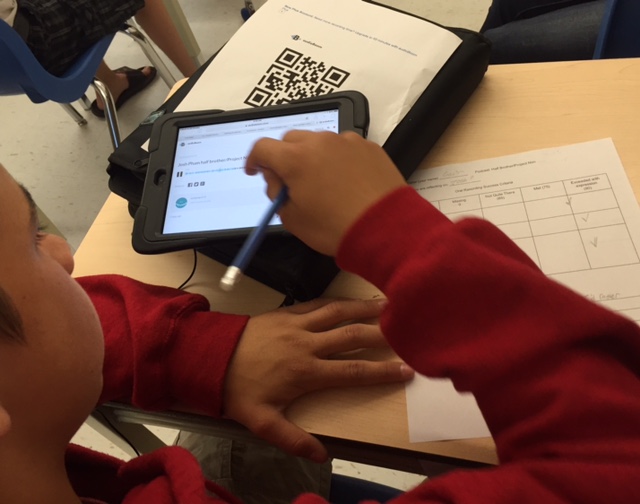 We all know peer assessment plays an important role in formative assessment. It supports learners as they reflect upon their own work, but also the work of others. Additionally, it can be used as a component in assessment of learning skills. But it can be boring, needing a change.

Today, the risk of using a new tool paid off!

My class recently completed a reading, writing, and oral assignment where they were asked to compare the class read aloud, Half Brother by Canadian author, Kenneth Oppel, to the documentary the novel was based upon, Project Nim. Along the way, scaffolding and feedback were routinely provided. After the writing, students were asked to record a podcast using Audioboom, print off the QR code, and peer assess two other students’ work. It’s the first time I’ve used Audioboom with the QR code requirement. Students need a computer to print off the QR code, and yes, there were a few glitches. We learned students can’t be logged into their account via their ipad and a laptop in order to see if the recording had uploaded.

Once the QR codes were printed, instructions were given on how to peer assess. Download a QR code reader, follow the success criteria, assign a mark. 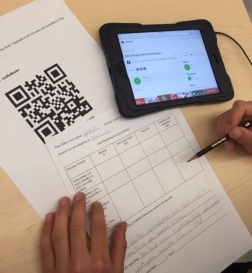 I’ve used several tools with my students for peer editing before, including google docs. But I found this method to be superior. Why?

1. When students were done peer editing their first assignment, there was no bottleneck. Ready to move on to the next student? They found the QR code of the next assigned student, zapped it, and moved back to their work area to complete. 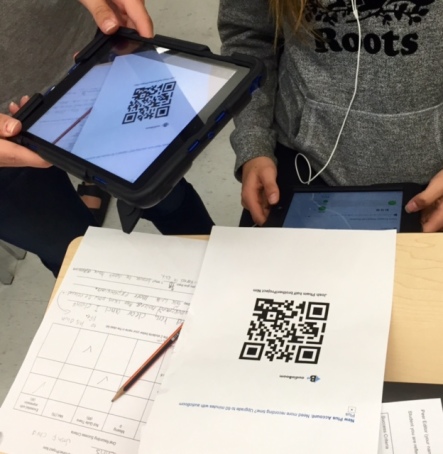 2. Students weren’t writing over top of each other as experienced when using google docs. That’s frustrating for them.

3. And of course, it was a new tool for them. They were intrigued. We need to change things up every now and then.

While that was impressive, what came next was a win.

Students were told, “Your peer assessments will be returned to you, the owner. Read through it, and at the end, write me a note. Do you agree/disagree with the mark? If so, justify.”

While most agreed, there were several responses that stood out. For example…

Aiden’s editor gave him a 72 because he “lacks expression”, so Aiden responded with “I deserve a 75 because I am sick.”. Yes, he is recovering from a cold, and so he got the 75. Aiden showed initiative and self-regulation by sticking up for himself.

Ben received an 85 from his peer editor, but he refused it. “I disagree, because the two “mets” (worth 75%) should bring it (the mark) down more than that.” Ben clearly demonstrated self-regulation (following the rubric/success criteria), and responsibility. And his reflection made me smile the most.

Peer and self-assessment helps develop a greater sense of responsibility, as students not only honestly reflect on their peers’ work, but also on their own. In terms of summative assessment, I found my students’ ratings of their peers to be honest and kind.

At the end of the exercise, one of the students asked if I was going to be marking the assignments as well. After confirming I would, he responded with, “I wish we could do this all the time.” The battle cry for “student voice”.