It was somewhat unnerving.   I had just started reviewing my resources while preparing a unit on earthquakes for my Gr. 7/8 geography class, when the news hit of the earthquake in Chile.  Within an hour, educators I follow on Twitter such as @Larryferlazzo and  @cybraryman posted extensive lists of sites and lessons.  Others on #edchat began tweeting links containing news video, causes of earthquakes, and interactive sites.  The generosity of these educators was appreciated.  My resources were now “real-time” and much more relevant for my students.

Newly created communities were being formed through hashtags (#chile, #earthquake,  #terremotochile, #concepcion) as those in the affected areas tweeted updates on tremors, relief efforts, pictures and videos.  Sadly, they include requests for the missing.﻿﻿﻿ 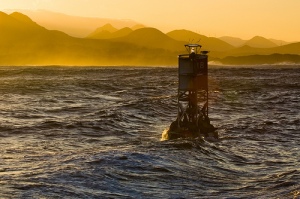 Twitter is being used in places I’d never have imagined, such as a tsunami tracking device, posting tweets from 99 buoys spread across the Pacific Ocean.  Users can literally “follow” an individual buoy, located in the path of the reported tsunami.  These buoys send out tweets every 60 seconds.  Average swell heights of 2 to 3 feet were now being tweeted at 15 to 18 feet from buoys off the coast of Santa Maria, California; Kodiak Alaska; and 97 others.  My students will be astonished when I share this with them in class.

Social networking sites like Twitter bring the world into our homes and our classrooms.  Our students have access to learning that will provide an impact.  They have front-row seating.  As educators, let’s make sure we provide the tickets.