In his TEDGlobal talk, Where Good Ideas Come From, Steven Johnson uses the term, “liquid network” to describe a learning environment where innovation and deep thinking happens. He describes it as “kind of chaotic where ideas are likely to come together, where people were likely to have new, interesting, unpredictable collisions – people from different backgrounds. We take ideas from other people and we stick them together in new forms to create something new.”

The Idea Hive recently created their own “liquid network” in a shared writing project. The Idea Hive is a year-long collaboration connecting Clarence Fisher’s students in Snow Lake, Manitoba with my students in Wingham, Ontario. In previous posts, we’ve described the Skyped read aloud, backchannel and virtual bulletin board process that connects us daily as we journey through the novel, The Book Thief.  At this point, we’ve reached the story within the novel called “The Word Shaker”. This illustrated fable is written and presented by the Jewish character Max, to the young German protagonist, Liesel. The story mirrors the use of propaganda by Hitler. In Max’s story, a young girl (“the Word Shaker”) is encouraged to fight words of hatred with words of love.

After being given copies of the 11 images only from the fable (no text), students in the Idea Hive were asked to work together to predict the story Max had written. Each group (2 students from Ontario, 2 from Manitoba) used a shared Google doc and the sidebar chatroom to communicate and create their story. 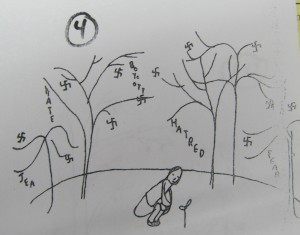 During the 45-minute work periods, the room was completely silent as students participated in their group’s chat room, formulating plans to be transferred by the agreed-upon “recorder” into the document. After the first work period, Clarence and I each had a discussion with our own students about the process. Students loved the high rate of participation by most group members. They engaged in debate, synthesis and cooperation. They had fun. Frustrations due to technical troubles were similar at both ends. This highlighted the fact that collaborative skills (inclusion, wait time) were even more important when working only with text. 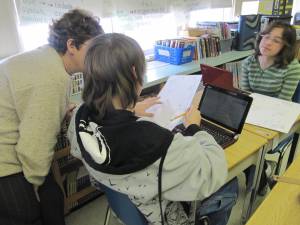 Avery is excited and proud to tell the principal about the shared writing activity he's working on in the Idea Hive with his partner here in Ontario and two others in Manitoba.

The students’ level of engagement in the following days spoke for itself. The silence in the classrooms continued as students actively “chatted” in their groups. On day three and four,  students who were home sick joined their group online in order to participate in the project.

As students wrote, Clarence and I dropped in and out of the 11 chat rooms, offering quick suggestions or asking a few questions. We watched the story document develop while the brainstorming and discussion carried on in the chat room sidebar. Clarence’s description – “mesmerizing”. 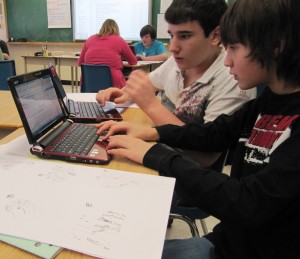 Once the groups finished writing their interpretation of Max’s story, the groups presented together some of their images via Skype to the Idea Hive class, then posted their finished work on their blogs (click on student names below to view group stories). 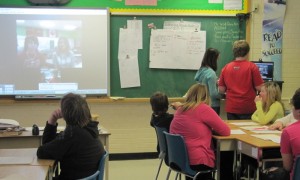 So, other than creating a story, what did the students learn?

While chatting with others via computer, I learned….

….to slow down and be patient.  Not all of us think alike and we work at different speeds.  …to stay cool with someone and not be annoyed, because you never know what could be going on with the people on the other side. Tyler

…to really think before we typed to avoid sounding like we were singling out one of our partners, or that we thought our way was the only way. … to go with others and give them a chance.  Our story wouldn’t have turned out as good if we didn’t include our partners’ ideas. Kori

…that if someone is going off track then you shouldn’t follow.  In fact, you shouldn’t be afraid to tell them to get back on track.  Brad

….it was easier to talk on Skype after talking in the chatroom, because I felt I already knew them.   Nataja

…that it’s important to start the chat by socializing with your partners.  Trevor

…that I want to do this again because I like interacting with people I don’t know.  Our story was better than the one I would have created on my own.  Ethan

…that working this way changes your way of thinking.    Justin

These students have learned lessons far beyond those outlined in the curriculum. They are displaying skills that any 21st century employer seeks.

Innovation often happens in unlikely, unpredictable ways. Creating opportunities for our students to learn in this “liquid network” help to lead our students in completely different pathways they’d never thought of. Across 2 700 km, students used the power of words to collaboratively developed an understanding of the importance of words. In a text-only collaborative process, they themselves became “The Word Shakers”.

2 thoughts on “Word Shakers in the Idea Hive”